The University of Chicago

In the middle of his college search in 2013, Baxter Stein knew he wanted to attend a school where he could pursue his passion for politics and public service, but finding one with possibilities for real engagement proved more challenging than he anticipated.

“For students interested in politics, it’s hard to find schools that go beyond clubs for Democrats or Republicans,” said Stein, now a fourth-year student in the College. “There was nothing clear that I found at other schools, but the Institute of Politics immediately jumped out to me about the University of Chicago.”

Stein was among the first students who chose UChicago in part because of the Institute of Politics, which launched in 2013 under the direction of David Axelrod, AB’76, the former chief strategist and senior adviser to President Barack Obama. A 35-year veteran of American politics and journalism, Axelrod saw a need for a non-partisan institute to kindle a passion for civic engagement and public service—and provide pathways to engagement for students on this politically and culturally diverse campus.

“I was struck from the beginning by how much the young people on this campus see themselves as part of the larger world and feel a responsibility to it,” Axelrod said. “By bringing high-level practitioners in politics, policy and public service to campus, and sending hundreds of students on paid internships in Washington and beyond, we are giving them the opportunity to explore the impact they can have in the public space.”

On Feb. 7, the institute celebrated its fifth anniversary with an event with Canadian Prime Minister Justin Trudeau, who highlighted the importance of public service in an event that marked his first official visit to Chicago. (Watch the video here).

“That idea of civil, intelligent rational discourse in politics is one that young people like you are demanding more than just about anyone else,” Trudeau said. “And that, when we look at all the challenges we’re facing around the world, is the one thing that gives me more cause for hope than just about everything else.” 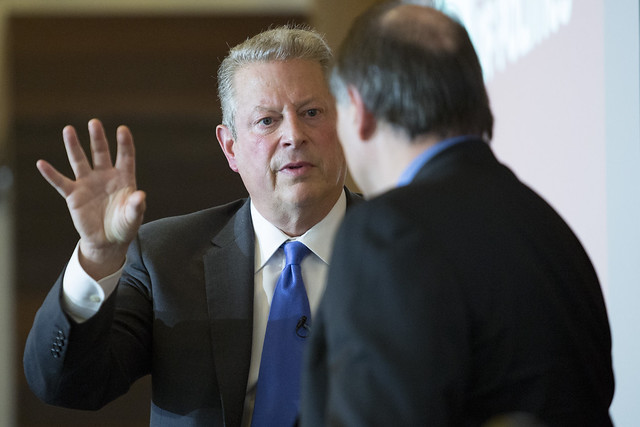 Guest speakers invited by the Institute of Politics.

These events helped transform the opportunities for UChicago students to explore how they can make a difference through public service.

The IOP “was definitely a big piece of why I came here,” Stein said. “I really liked the idea that there was actually a spot on campus where you could go to be around politics, and I just didn’t see that at other schools.”

When its doors opened in January 2013, the extra-curricular IOP offered students four key program areas: the speaker series, in which students and political leaders explore key issues of the day; the fellows program, where resident and visiting fellows lead weekly seminars and mentor students; the civic engagement program, providing a range of academic year projects that enable students to develop leadership skills and serve their communities as well as annual trips; and the career development program, which offers students the chance to gain hands-on experience via 300 fully funded internships around the world each year.

The IOP community offers a unique chance for students to engage with policy practitioners and journalists from across the political spectrum, said former U.S. Transportation Secretary Ray LaHood, a current advisory board member at the institute.

“The vision that David had to give the students and the community an opportunity to hear different points of view from all different parties, I think is just extraordinary,” LaHood said.

Many guests participate in Axelrod’s critically acclaimed podcast “The Axe Files,” which focuses on the backgrounds and personal experiences of its guests. Already with more than 210 episodes, “The Axe Files” has featured guests such as President Obama, Madeleine Albright and Condoleeza Rice, and been turned into a TV show airing on CNN.

“I was struck from the beginning by how much the young people on this campus see themselves as part of the larger world and feel a responsibility to it.”

It is not only through the podcast and the speaker series that the institute elevates the political discourse—it is through programs that expose UChicago students to different perspectives and communities and provide them with hands-on experiences.

Just this month the IOP launched a public service leadership program with Eureka College that brings together two student cohorts, gives them a chance to break down the silos between them, and promotes a deeper understanding between urban and rural schools. In recent years, the IOP has taken students to Cuba, Indonesia, China, San Francisco, Springfield, Ill., Des Moines, and Washington, D.C.

During the academic year, the IOP’s student-led civic engagement projects attract a diverse range of students. Fourth-year Caroline Hutton leads the Women in Public Service Program, which aims to inspire and empower University of Chicago women to pursue careers in public service.

“It’s not just about running for office anymore. It’s about all forms of public service, and people are hungry to make a direct impact, to feel like they’re making a difference and taking action,” said Hutton, who is chair of the IOP’s student advisory board. “The IOP’s civic engagement programs are exactly that.”

‘It’s exceeded all my expectations’

According to a recent alumni survey by the IOP, the institute’s efforts are bearing fruit: 70 percent of respondents said they are currently working in public service jobs.

Perhaps no program area, though, generates more interest among students than the IOP’s robust internships offerings. Each year the IOP offers about 300 fully funded internships, from the White House and the State Department to countries such as Brazil, India, Spain and Sweden. The competition is fierce: For every internship, the IOP receives an average of 20 to 25 applications.

Since coming to campus, Stein has attended events with guests such as Mitt Romney, Elena Kagan and Eric Holder; he’s served as an ambassador for visiting Fellows Mark Udall and Bill Bradley; he’s participated in civic engagement projects such as the Maroon Veterans Alliance—a student-run veteran support and advocacy program—and gone on IOP trips to the 2016 Iowa caucuses and the 2016 Republican National Convention; and he’s spent a summer in Washington, D.C. interning at Blue Engine Message & Media.

“It’s exceeded all my expectations. I always wanted to study public policy, but it needed to be more hands on than just that,” he said. “Here I can meet speakers and fellows and learn from actual experts. That has been huge for me.”

No summer vacation for innovation at Polsky Center

Prof. Eugene Parker, who redefined how we view the sun, witnesses launch of solar mission